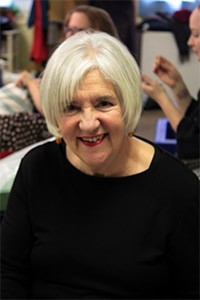 Marilu & I were invited by Julie to sing with a small group of like-minded women shortly after the original (7). We joined the group before we had a name or an accompanist and Don was still singing with us. At one point the name, “The Queen Bees and One Drone” was a suggested name. We chose “Mountain Melody”. Some of our first gigs included marching in parades in Moke Hill, walking directly behind the fire trucks which we learned was not a good place for us. We continued singing wherever we could and slowly have progressed over the years to where we are now. I have seen members come & go and yet, there are still some of us who have continued year after year. I have nothing but praise for Julie whose LIGHT, talent, and dedication has carried us through and made us what we are today. Mostly, I love music which is to be shared with everybody!